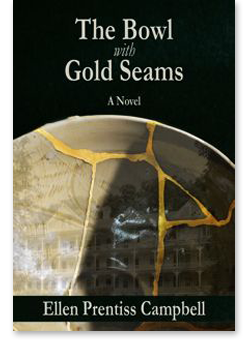 The Bowl with Gold Seams

Ellen Prentiss Campbell’s debut novel was inspired by an unusual chapter in the history of the Bedford Springs Hotel in Pennsylvania. During the summer of 1945, the State Department selected the resort to serve as the detainment center for the Japanese ambassador to Berlin, his staff, and their families.

The novel tells Hazel Shaw’s story of unexpected personal transformation — both as a young woman working at the hotel among the Japanese, and the further story of the reverberating lifelong consequences of that experience. The final events of the war challenge Hazel’s beliefs about enemies and friends, victory and defeat, love and loyalty. In the ensuing years she remains haunted by memories. Long after the end of the war, an unexpected encounter causes Hazel to return to the hotel and she must confront her past, come to terms with her present life, and determine her future.

Praise for The Bowl with Gold Seams

“With a sharp eye for detail and accuracy, Ellen Prentiss Campbell recreates a little-known true moment between the Allied victories in World War II—VE Day and VJ Day—when a small resort hotel in the gentle hills of Pennsylvania housed detained Japanese diplomats, and their families and staff, who had been working in Germany. The complexities of wartime loss and bitterness on the home front—and of human compassion—come to fore when one young woman’s life is intensely entwined in this single summer’s experience, and when the memories cascade with poignant force decades later. This unusual story surprised and moved me, especially in its tender portrayals of father and daughter, and of difficult loyalties in friendship and love—loyalties that would, as Prentiss Campbell writes, come to make what we assume about ourselves and ‘our small world…disappear like morning mist burning off the river.’”
—Eugenia Kim, author of The Calligrapher’s Daughter

“In Ellen Prentiss Campbell’s psychologically astute, highly original novel, cracks in a bowl are repaired with gold, and the resulting network of shimmering lines makes it lovelier than ever. The bowl figures in a fascinating, historically based story: as Japan loses the second World War, captured Japanese diplomats are confined in a Pennsylvania hotel that is staffed by local young people. Years later, the head of a school in trouble, meets up by chance with the child she befriended in the last months of the war, and experiences again the beauty of what is broken.”
—Alice Mattison, author of When We Argued All Night

“This is sharp, vivid, and gut-wrenching story-telling of the most powerful kind.”
—C.M. Mayo, author of The Last Prince of the Mexican Empire 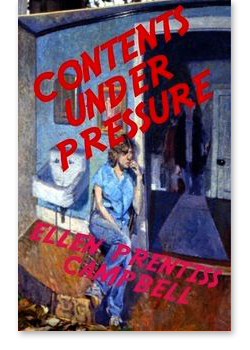 Nominated for the 2015 National Book Award in Fiction

In this collection of eleven short stories, Ellen Prentiss Campbell explores loss and yearning, hope and fear, and the tension between imagination, memory, and reality. She takes her characters — young, middle-aged, and elderly — to moments where the border between past and present crumbles.

Campbell uncovers dramas and mysteries beneath the surface of daily life whether in the foothills of the Allegheny Mountains, the suburbs of Washington, D.C. or the heart of Manhattan. A practicing psychotherapist, she brings the art of listening for the unspoken, and expressing the unspeakable, to these pages.

Praise for Contents Under Pressure

"Contents Under Pressure is a beautiful story collection by a writer whose wisdom and compassion illuminate every page. Ellen Prentiss Campbell understands how her vividly drawn characters can love and hurt each other simultaneously, and she probes into the recesses of their hearts. Altogether a pleasure to read."
—Author Lynne Sharon Schwartz

"The strange and the unexpected play powerful roles in Ellen Prentiss Campbell’s haunting stories of transformation. The characters’ dilemmas—a foundering marriage, a child’s death, a father’s madness—are not so much resolved at the story’s end as they are given surprising new forms. In one, an amazing tour de force, a young woman drawn to the underwater world is transformed into a mermaid. Campbell’s precise, elegant prose renders her gift for the uncanny both believable and a wonderful read."
—Kate Blackwell, author of You Won’t Remember This

"Ellen Prentiss Campbell’s Contents Under Pressure is an aptly named book, indeed. These stories crackle with tension, delivered in language with the concision and precision of poetry. Never predictable, always insightful, and often breathtakingly acute. Campbell is a writer to watch."
—Rose Solari, author of A Secret Woman